The Night I Beat Up Conor 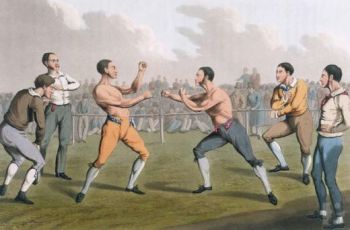 To look at him today, to hear him run his mouth and then make good on every boast, you would think Conor was born that way—a nearly unbeatable braggart. But it’s me here to tell you he wasn’t, for wasn’t I myself the first man to best him? Not in the warm and cozy confines of the ring with a referee to protect him, neither, no! I beat Conor in a street fight.

I can see by the look on your face that you don’t believe me, but you’ll soon see the light. I remember it like it was yesterday. Yesterday evening, anyway, ’cause I was out on my evening run. Twice a day I ran back in them days. Nine miles in the morning on an empty stomach, nine miles in the evening before Corrie come on. Anyways, I was runnin’ past the gym there just like always, when some young lads come out, laughin’ and yellin’ and carryin’ on. You know the type. So full of life it just makes you want to puke. You just can’t wait until life comes along and teaches ’em a painful lesson. But that night it turned out I was the lesson.

Those sorts of boys always have a ringleader, and Conor was it. Sure they were all just fresh out of a kickboxing workout, just amped with adrenaline and Conor more so than the others. Even back then I have to admit he was a sight to see. He didn’t have the tattoos yet, nor the undershave hair cut—say, do you know where he came by that haircut that half the men in the country have now? He got the idea from me, that’s how! Back in my days that haircut didn’t have a name. There was only one kind of haircut and that was it. I think I impressed him so much by kicking his arse that he wanted to be like me, you see, with the beard and all. Sort of like how the young Indiana Jones grows up to look like the fella that steals the Cross of Coronado from him at the beginning of the third movie.

Where was I? Oh yes, about to give Conor a boot up the hole. So anyways there he is with his mates outside the gym, play sparring and messin’ about. MMA wasn’t exactly a new thing in them days, but it was new enough. In my day, it didn’t have a name. You learned to box from your daddy and you learned some dirty tricks in the schoolyard. Maybe you had an uncle that taught you some judo. You’d watch some Bruce Lee movies and try out some of his moves on your mates, usually when they were too drunk to fight back. In the morning they’d be sore and you’d tell ’em they fell downstairs and they’d be none the wiser. You’d mix all that together and that’s how mixed martial arts was invented.

So here’s Conor throwin’ Muay Thai roundhouse kicks into his mate’s thigh, trying to give him the dead leg. And I seen Bloodsport enough times to know he ain’t doin’ it right. So—and here’s the thing—I stopped and tried to help him. I wasn’t lookin’ for trouble, just tryin’ to be of service to the youth. And so when I says—

he spins around and catches me with a right hook. Now granted, it was dark, and I was sweating and breathing heavy. Also, I was dressed in black. But that’s no excuse for hitting your elders! I have to admit his shot rocked me back on my heels, but I was into fighting stance before the spots faded from before my eyes.

“Hit him, Conor, hit him!” the other ones yelled. I knew I had to act fast, for though  I knew that I could beat them all one at a time, if they rushed me, my chances were slim.  I’m taller and heavier than Conor, so I scooped him up like a sack of potatoes and slung him over my shoulders. He was kicking and spitting and swearing and his friends were wide-eyed and screaming bloody murder. Never in my life have I seen such a miserable example of our nation’s manhood. I spun him around a few times and then tossed him headfirst into a pile of rubbish.

“I will obliterate you!” he screams at me as he starts to get up. But before I can finish him off, his daddy and his trainer come of the gym shouting “What’s all this?” and “We’ll call the guards” and making excuses like ” he’s only twelve years old.”

Twelve years old or not, it was still a mean right hook.

And I can still say I beat up Conor.

Conor’s face after the fight

This entry was posted in Short Story, Uncategorized and tagged short story. Bookmark the permalink.

22 Responses to The Night I Beat Up Conor